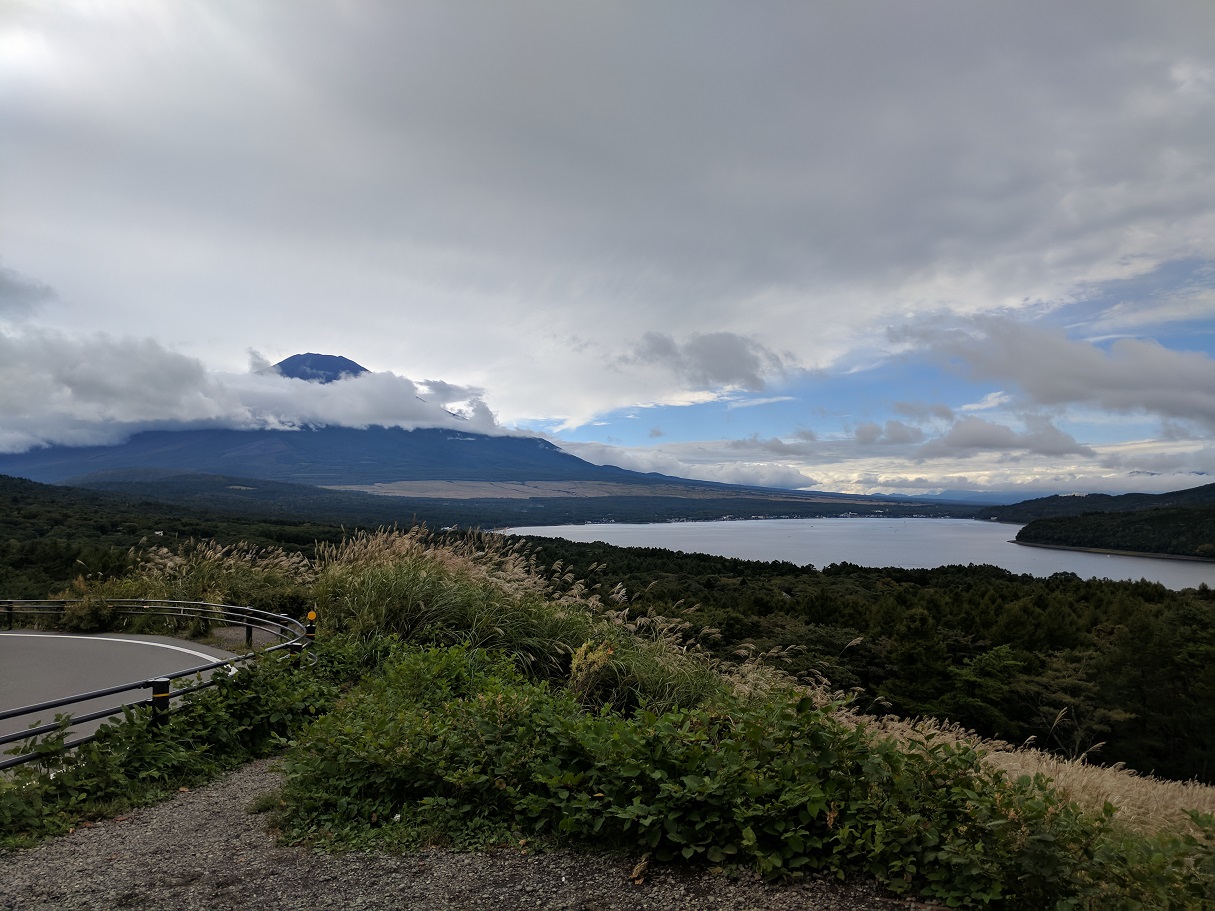 We woke up to an unexpectedly fantastic view of Mount Fuji and lake Yamanaka from our camping spot at Panorama-Dai. Unfortunately, it became cloudy after that so we couldn’t fully see Fuji for the rest of the time we were up there.

Our neighbors were a friendly Japanese couple who had also camped the night in their campervan. They advised us to park a little more economically to allow for other cars to fit into the space as well (it certainly did get more crowded later in the day).

It turns out that the place we’d stumbled upon was a real find. It’s a lookout point called Yamanakako Panorama-Dai (山中湖 パノラマ台) that offers a fantastic view of lake Yamanaka and Mount Fuji in the background.

We didn’t even know it existed, but just so happened to see a spot with an amenities block and because it was getting dark, we decided to pull up for the night there. (There are also plenty of free parking spots down around lake Yamanaka itself as well, some of which have toilet blocks. It would be easy enough to find a place to stay for the night in a campervan around this area.)

The spot itself is a gravel section of car park just off a bend in the road as you come down a hill. There is a toilet block in the car park which makes it a good spot for campervans.

When we arrived at Panorama Dai the previous night at around 6PM, we were the only ones there. However, shortly afterward another campervan arrived to spend the night.

Anyway, we spent the first half of the day having breakfast and planning the rest of our campervan trip with the help of our new Japanese friends. Despite the language barrier, our limited Japanese skills and their (much better) English skills were enough for us to communicate, and they gave us some good tips about where to go, what to see, and what the parking situation was like in different towns.

Some of their friends arrived later in the morning, and they even offered us coffee and helped us cook our pizzas with their blowtorch when we ran out of cooking gas.

After lunch, we decided to head off down to the lake and towards our next destination – lake Kawaguchiko.

First we stopped at a lookout point at lake Yamanaka that was marked on the Area Map Guide sign at Panorama-Dai. There was a  really nice view of Mount Fuji from here because the clouds had cleared.

A few people were camped at the water’s edge and it looked like there were activities like canoe/boat hire on offer.

We were going to go to Oshino Hakkai which is between Lake Yamanaka and Lake Kawaguchi, but to be honest, we actually forgot. By the time we remembered, were already too far past it to detour back.

Oshino Hakkai was recommended to us by the Japanese locals who we met earlier, and has several natural clear water springs. It’s also UNESCO listed, so really unfortunate that we didn’t get to see it! According to the reviews on Trip Advisor, it can be a bit touristy, but the general consensus seems to be that it’s worth a visit. It’s certainly on my list for next time.

Instead, we went to the Michi No Eki(roadside station) at Fujiyoshida for some supplies – topping up our water supply and grabbing some extra cooking gas from the Montbell shop that was there. We then headed towards the Ice and Wind Caves.

We didn’t really have time to look around the Michi No Eki but in the same area you can see the Mount Fuji Radar Dome and the Fujisan Museum. Apparently the radar an old unit from the top of Mount Fuji which was previously used for weather predictions, and you can even experience the wind force and temperature that you would at the peak of Mount Fuji as one the the exhibitions at this museum. However, sources say that English explanations are limited to a leaflet so keep this in mind.

On the way to the Narusawa Ice and Wind Caves, we followed a sign on the side of the road to see some lava tree molds. These are where lava has flowed around trees, and the trees have burned away and left a hole where they once were.

Although they just look like a bunch of holes in the ground, it was cool to think that we were standing on a bed of lava, and some of the holes left were actually quite large.

When we arrived at the Narusawa Ice Cave, we decided to go for the package ticket that allowed us to see both the Ice Cave and Wind Cave (600 yen per person). The two caves are located quite close to each other – just a short 2-3 minute drive (or a 20 minute walk through the suicide forest – but we opted to drive).

The caves themselves are pretty small, and you can look through them both in under 10 minutes each. It was definitely cold in the cave though, and ice was still frozen in there.

The caves are naturally cold, due to underground water that flows near them.

The wind cave was a little underwhelming and we didn’t notice any wind when we walked through it. But it was still a cool experience and also had ice inside it.

There were some storage cases set up though to illustrate how the cave is used as a natural refrigerator.

After the caves, we took a short walk in the Aokigahara ‘suicide forest’ which is around the base of Mount Fuji.

As far as we could tell, there is no single main access point to the Aokigahara suicide forest, but there is a small entrance to the forest through the car park of the Narusawa Ice Caves.  It was convenient enough, so we went in for a quick stroll.

The forest itself is quite serene, but it has a strange feeling of sadness knowing the history and many deaths that occur in the Aokigahara forest due to suicides. It’s very green, quiet, and the many tangled roots and mosses growing as far as the eye can see are really quite beautiful.

Finally we drove on to our final destination, Lake Kawaguchi.

We set up for the night in the car park at Oishi Park, alongside the Tourist Information Centre which is right on the edge of the lake.

Breathtaking views of the lake (and supposedly Fuji, behind the clouds) from here and an ample car parking space make it a great location for a free overnight stay. The nearest amenities are the toilet block of the nearby Tourist Information Center which were open overnight when we stayed there.

We had a nice hot dinner that we cooked in the back of the car and sat out by the lake to enjoy it before turning in for the night.