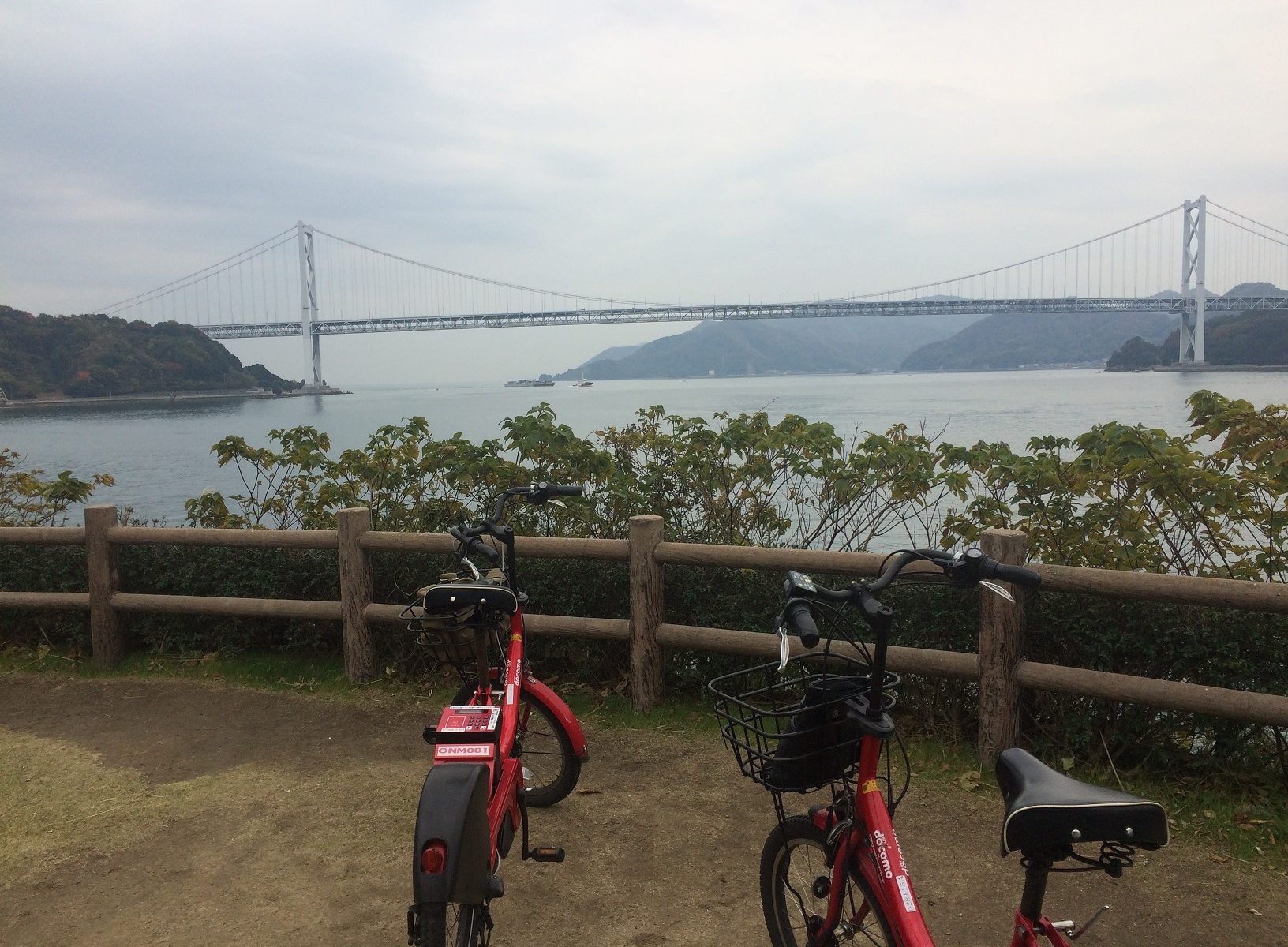 We wanted to try cycling part of the Shimanami Kaido from Onomichi, so we planned to do so as a day trip from Hiroshima.

Shimanami Kaido is a 60km long highway route with multiple suspension bridges that links the main island of Japan, Honshu, to the Shikoku island, via six small islands on the way.  It’s popular with cyclists and starts from Onomichi.

Onomichi itself is a good day-trip option from Hiroshima, even if you don’t plan on doing any cycling.  Unfortunately, we didn’t get a chance to check out the town because we spent too long on the bikes though.

The tourist maps and signs near Onomichi station offer plenty of advice on things to see around the area though.

Anyway, Onomichi is nearly about a 1.5 – 2 hour commute on public transport from Hiroshima, so you really need to get up early to make the most of your day if you’re doing a day trip.

We arrived in Onomichi around 9.50AM after getting the 8.10 train from Hiroshima. The first thing we did was go get our hire bicycles from the public docomo bike share area just outside Onomichi station.

We were worried that they might be taken since it was a weekend (Sunday), but it seemed like nearly the whole fleet was still available.

Anyone can self-hire these bikes on an hourly fee basis – you just need to register and sign up via the website beforehand. Then show up at the station and enter the pin code that they email you to unlock your bike. It’s really easy!

The good thing about these bikes is that they’re electric-assist as well (and in retrospect – you definitely want an electric-assist bicycle if you’re planning on cycling the Shimanami Kaido route. There are heaps of hilly areas to get up to the bridges between the islands.)

The plan was to cycle part of the Shimanami Kaido route (the whole thing is around 60+ km) and maybe go over 1 or 2 bridges, then come back, return the bikes and look around Onomichi on foot before heading home to Hiroshima.

I recommend downloading some maps before you go as otherwise you might waste too much time trying to figure out where to go. We didn’t download the maps or have much of a plan and so I feel like we missed out on seeing some things.

Anyway, the first thing we did was try to get to the bridge linking the mainland to Mukaishima Island.

Unfortunately, we hadn’t read the tourist advice that recommends against trying to cycle over this bridge – because the path is very narrow.

*About the Onomichi and Shin-Onomichi Bridges (Between Onomichi to Mukaishima)

It was also a bit of a mission trying to figure out how to actually get up and onto the bridge and we had to cycle on the road in some spots, which was a little scary.

In retrospect, we should have taken one of the two ferries from Onomichi.  However,  there was a great view on the bridge that we would have missed if we’d gotten the ferry!

Actually another cyclist did pass us riding on the side of the road, but we didn’t dare to follow him since there’s not really any shoulder on the road and the lanes are somewhat narrow. There seem to be a decent amount of cars whizzing by in both directions at all times too.

We cycled around Mukaishima island to the next bridge, which was quite impressive.

From Mukaishima, the road is marked with blue lines so you can’t get lost as a cyclists. There were even people standing at certain spots telling us which way to go. 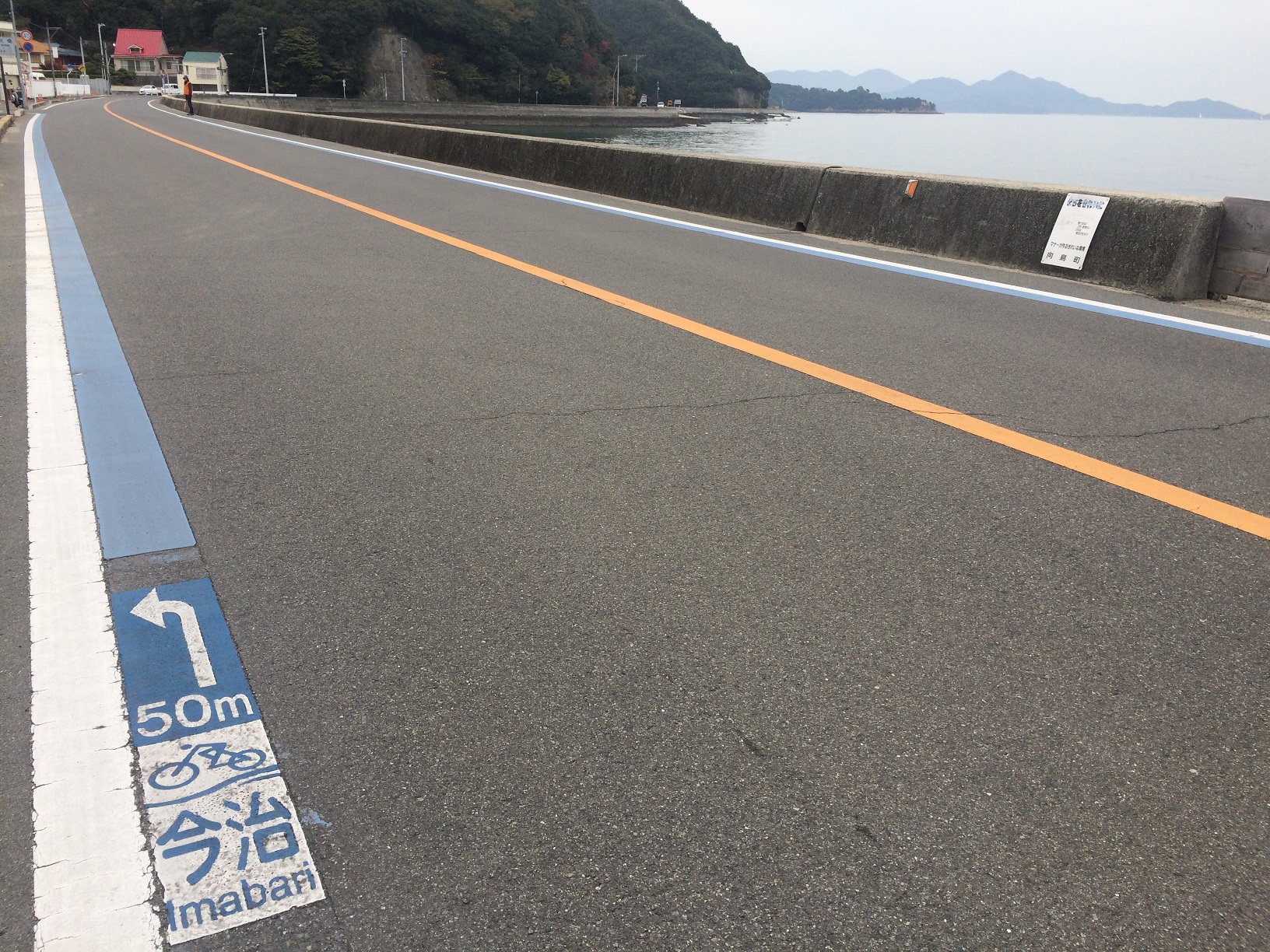 On Mukaishima island we found that there weren’t always dedicated cycling paths, but it was quiet enough that you could ride on the footpath or road without feeling too unsafe.

The ride was nice and scenic leading up to the second bridge (Innoshima bridge), as you’re right alongside the water.

We only went as far as going across the second bridge, having our packed lunch and then heading back.

On Innoshima bridge, which links Mukaishima Island to Innoshima Island, you don’t get to ride on the top of it – instead there’s a dedicated cycling pathway underneath the road.

There’s still a nice view, but it’s a little obstructed by all the supporting structures and cages around the cycle pathway.

On the return back to Onomichi, we saw where we should have caught the ferry from!

We ended up getting the train back to Hiroshima without looking too much around Onomichi due to time restraints.

If you’re planning on cycling the Shimanami Kaido, I’d recommend spending more than a day, or if you couldn’t spend more than a day, then make sure to plan your route so that you see the most scenic parts.

In retrospect, I probably would have preferred to look around Onomichi a little more, and maybe just cut the bicycle ride short to go over 1 of the more scenic bridges.