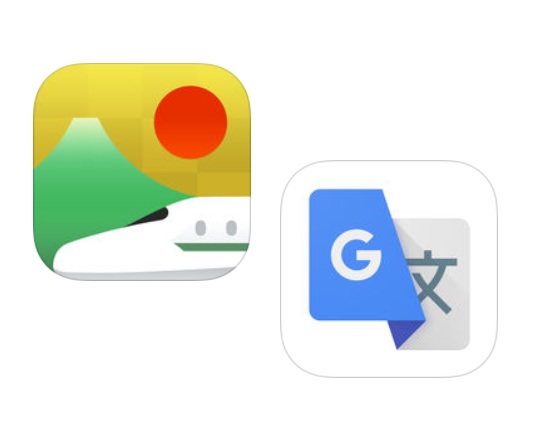 Before we came to Japan I remember doing some searching online to try and find the best apps for use in Japan.

I ended up downloading a bunch from various ‘top 10 best apps for traveling in Japan’ kind of online articles.

Now that I’ve been in Japan for about 6 months, I have to confess that a lot of those apps got deleted without even opening them or looking at them really.

However, here are a few that I actually use on a regular basis that have made life in Japan a lot easier.

The obvious app for any language/communication difficulties that we encounter with our limited Japanese levels (although we are improving!)
One useful setting to have on this app is to download the Japanese dictionaries for offline use. This means you’ll still be able to translate stuff even if you don’t have an internet connection.

I also recommend setting up the photo/instant translate feature. It lets you point the camera at Japanese text, scans and reads it automatically, and then translates it to English. Lifesaver!

This is our go-to app for navigating the public transport systems around Japan. It’s linked into Hyperdia (I think), which is the main source for figuring out train, subway, bus and plane times.

I really only use the “Route” feature on this app, but what I really like about it is that it shows you the train lines, platform numbers and even the intermediate stops. It also figures out all the changes and shows them in a straightforward manner – so you can pick the route option that has fewer changes, if you prefer.

It doesn’t only work in Tokyo; we’ve also used it in Hiroshima, Kyoto, Osaka and Hokkaido.

That’s it for now – a short list, but we’ll add to this in the future as we find any other apps!