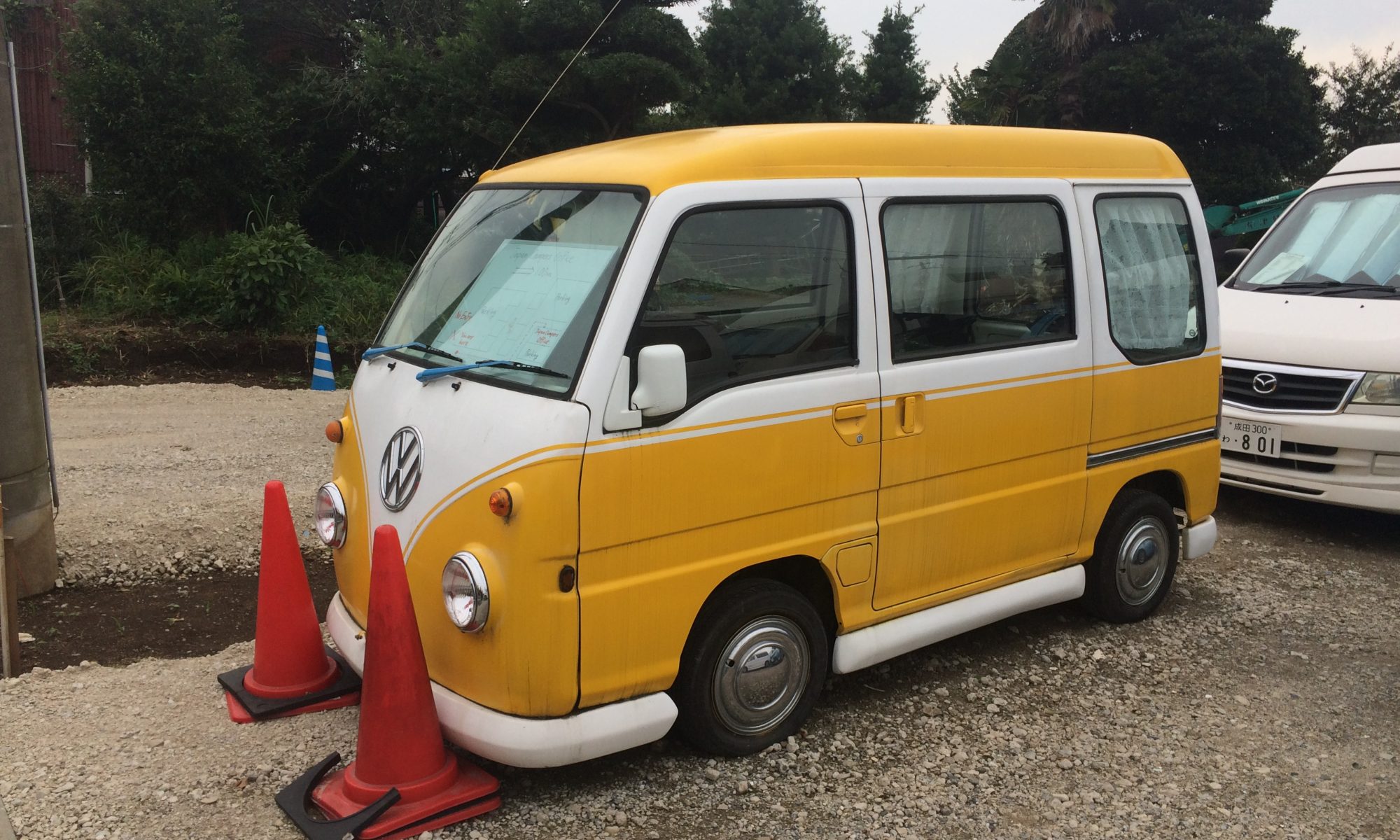 In order to explore around the rural areas of Japan a little easier, we booked a campervan through Japan Campers for 2 weeks.

A Mazda Bongo free top like this was our home for the next two weeks:

We stayed at the Japan Camper’s Guesthouse the night before our trip, but still slept in a bit in the morning, so we didn’t get away until after around 10AM.

It took about 2 hours to go through the insurance paperwork, pay our damage deposit, do our initial vehicle inspection, and get familiarized with the van. (I’m sure it’s usually much faster but we had a few questions about the insurance policies and also spent a bit of time organizing our gear).

We left the depot at about 12 PM, and headed to the local supermarket to stock up on some supplies!

Luckily the nearby Ito Yokado had free parking: 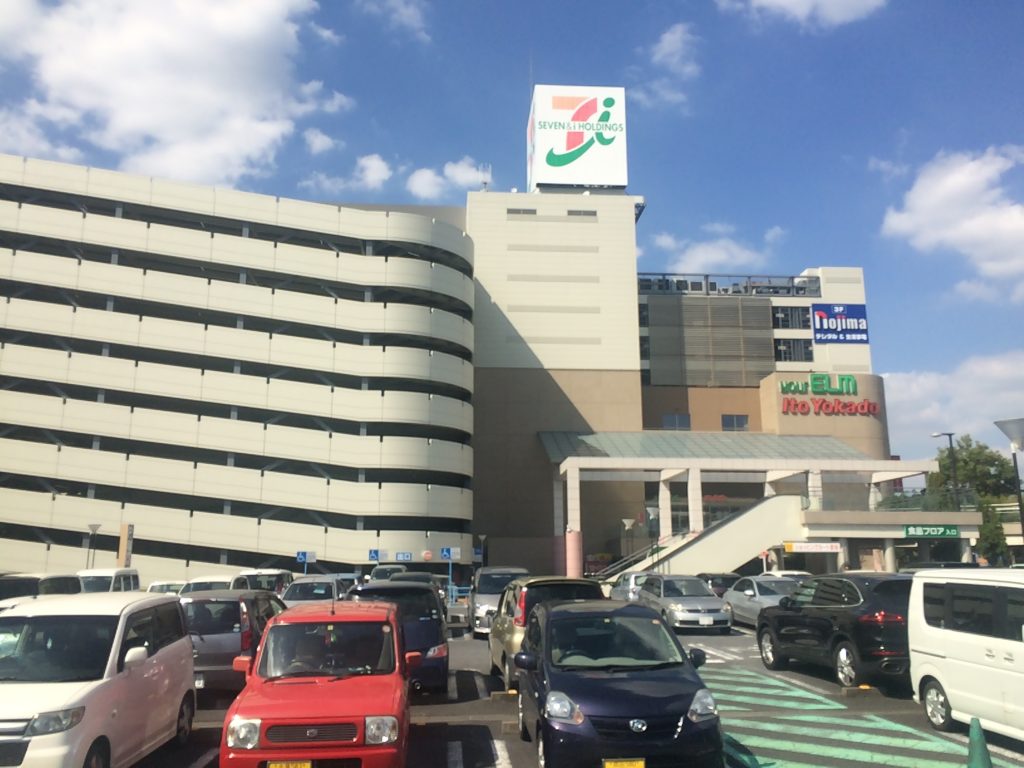 Lunch was a delicious roasted sweet potato and some deep-fried goods from the supermarket (if you haven’t seen these before, they are also commonly sold off the back of trucks that roam the streets in Tokyo): 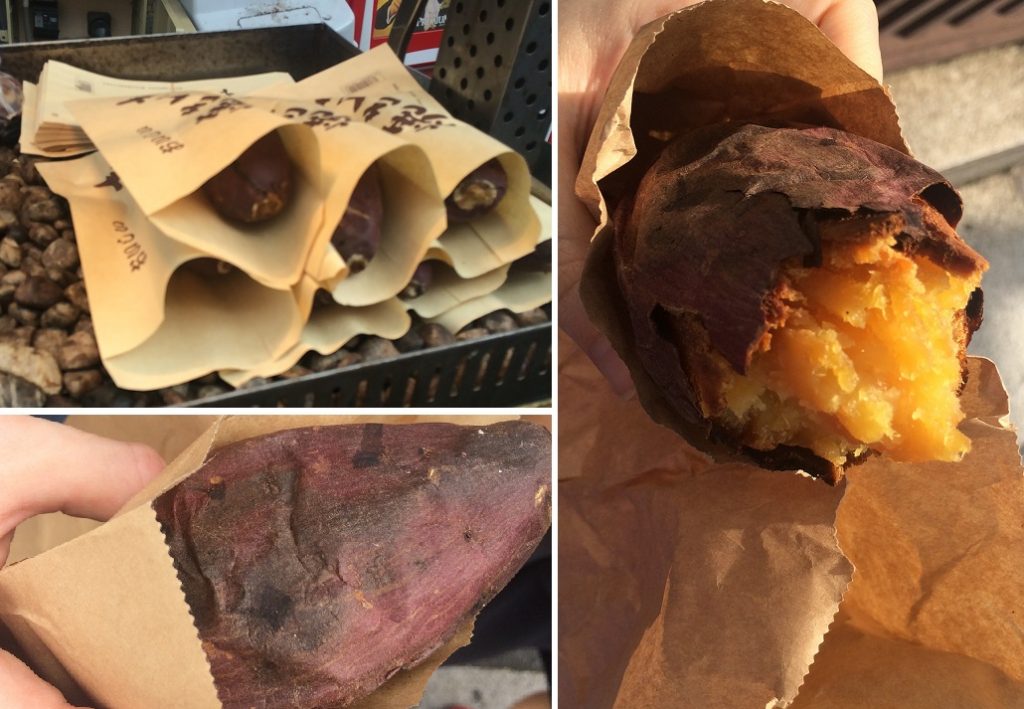 I actually managed to find a vegetarian lunch option at the supermarket which was labelled as  北海道産彩り6種の野菜コロッケ (6 types of Hokkaido vegetable croquet) and consisted of various vegetables encased in a deliciously oily, crispy, deep-fried layer. It would have been delicious hot, but was still very decent cold.

We left the supermarket a little after 1PM and entered our first destination into the GPS: Enoshima.

Japan Campers provide an iPad for navigation, so it’s easy enough to get around. 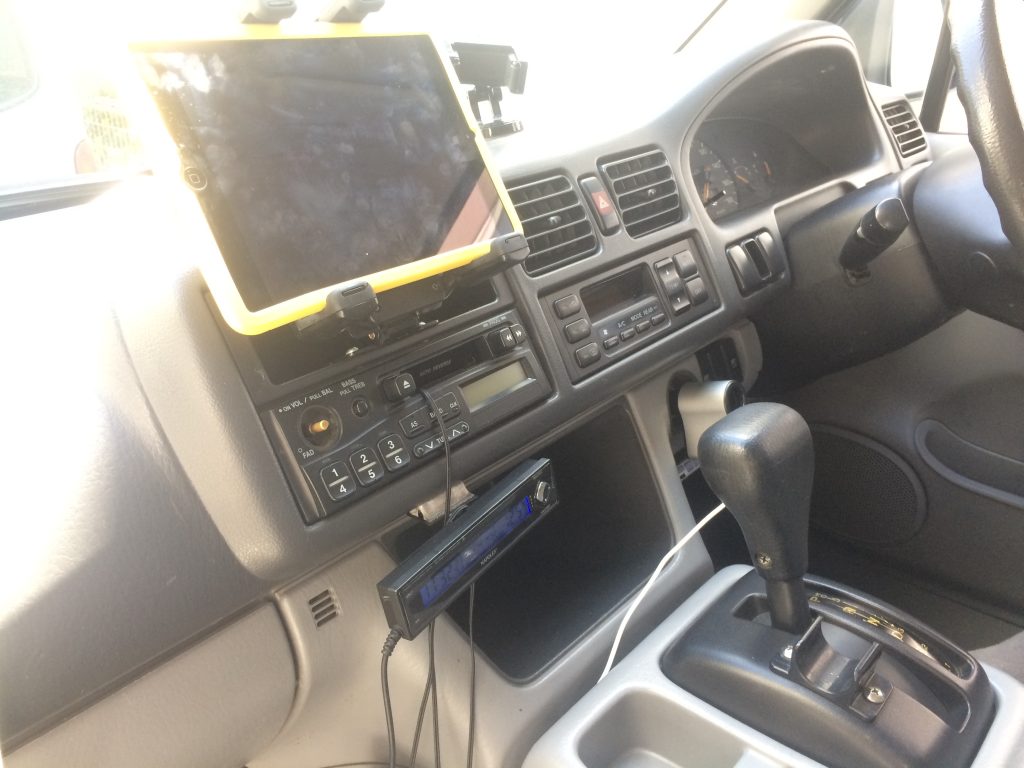 While only about 120km away from Narita, the estimated travel time to Enoshima was 3 hours and 50 minutes (something to get used to if you plan on driving around Japan – the speed limits are generally 40kph on most roads).

Despite it being a decent amount quicker if we took toll roads, we decided to avoid them because (a) we had no idea how much they cost but had been told they are expensive, and (b) we didn’t want to deal with the hassle of trying to figure out how the system worked while not being able to speak or read Japanese.

So we just enjoyed the newfound freedom of having our own car and being out and about on the roads. We also got to see some cool mono-rail type thing: 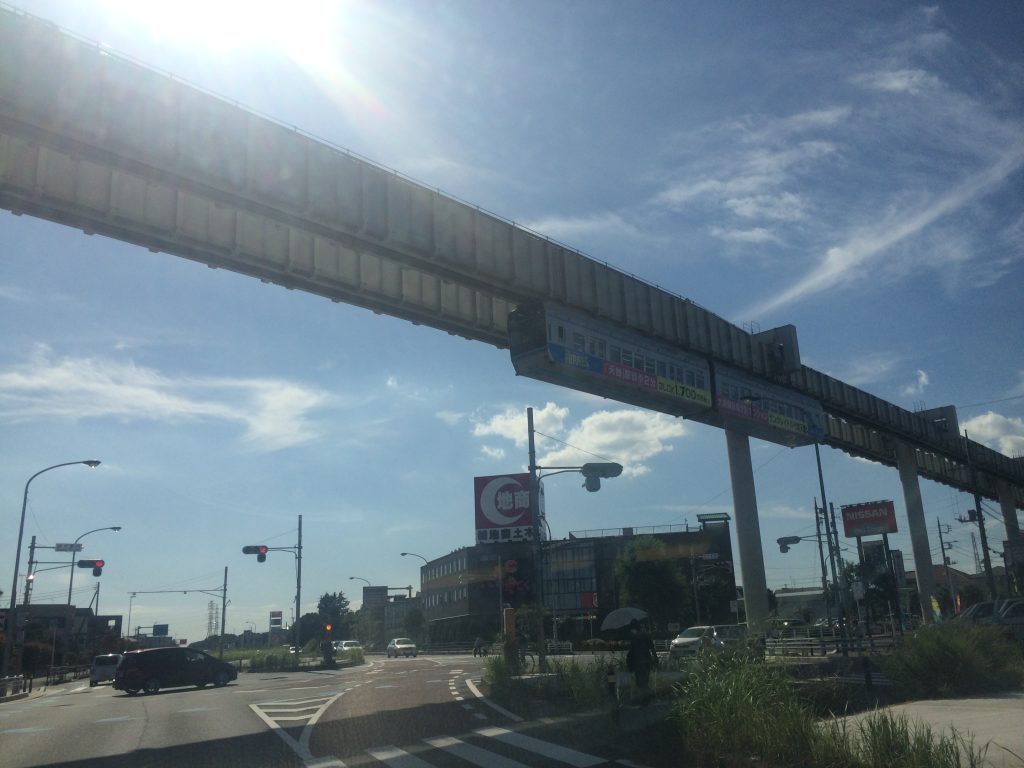 At around 3PM we tried to go to the Tatsumi Parking Area since it was en-route.  This is basically a parking area where car enthusiasts gather, and while it wasn’t a time when we’d expect cars to be there, we thought we might as well check it out anyway.

The problem was though, we couldn’t exactly find it!

Getting directions to the Tatsumi Parking Area is a bit of a mission as there’s limited information in English. It seems like your best option is to get someone to show you how to get there. 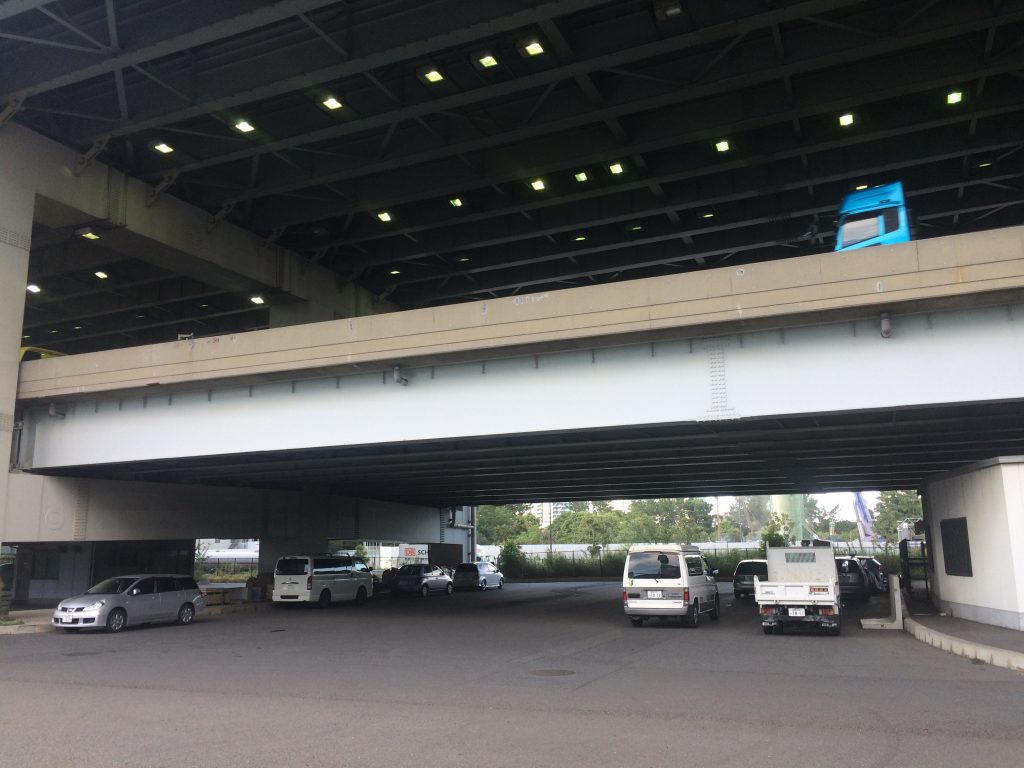 While we drove on one of the roads that loop around Daikokufuto and could see the parking lot, it’s still very confusing when it comes to seeing how to actually enter the parking area. Essentially, it’s only accessible by toll road, and you can’t enter unless you get onto the toll road.

Speaking of toll roads, these seemed to follow the exact same route as the non-toll roads most of the time. I guess the benefit of paying means that you get to travel at a faster speed limit and also be quite literally positioned above the rest of the cheapskates taking the non-toll roads: 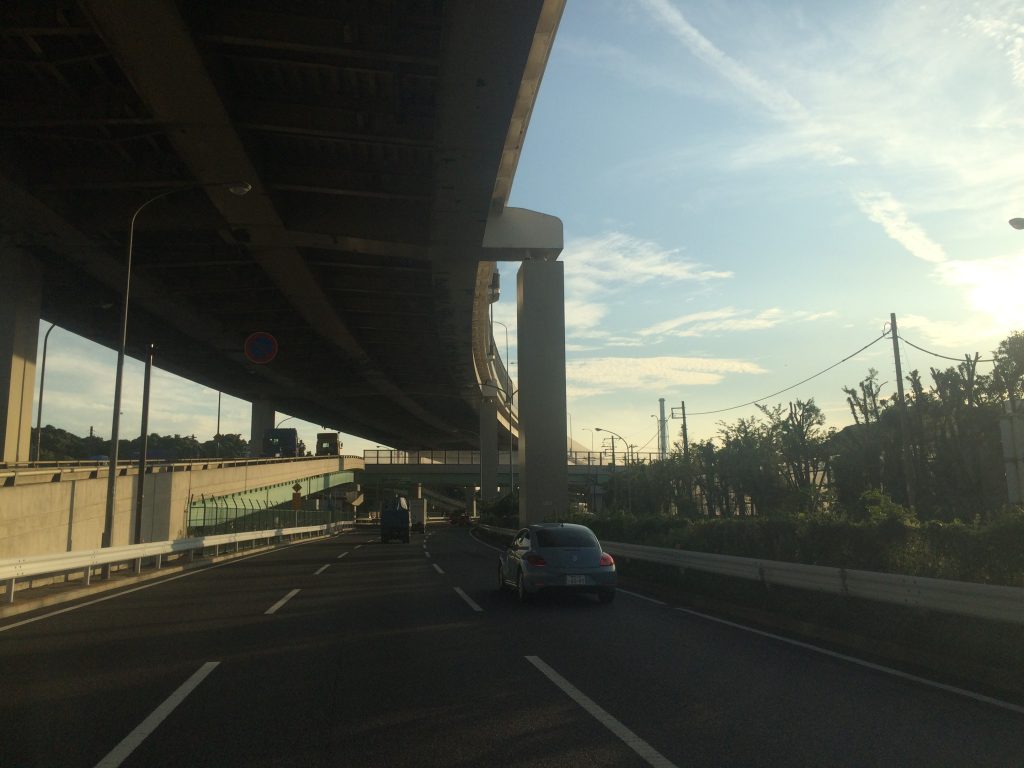 We decided to go to Kamakura to have a quick look around before we entered Enoshima. We got there at about quarter to 6 in the evening, and so began the parking nightmare which made us realize that a car can be a huge burden in Japan.

We went to the coin parking (which cost about 600 yen for an hour) to have a look around the main street.

Kamakura is apparently a popular tourist area being day-trippable from Tokyo. The main attractions are The Great Buddha at Kotoku-in (a huge statue cast around 1252), many temples and shrines, hiking trails, and nearby beaches.

Unfortunately, since we got there when it was already dark, we only got to see the main street area and have a quick look around the Tsurugaoka Hachimangu shrine. 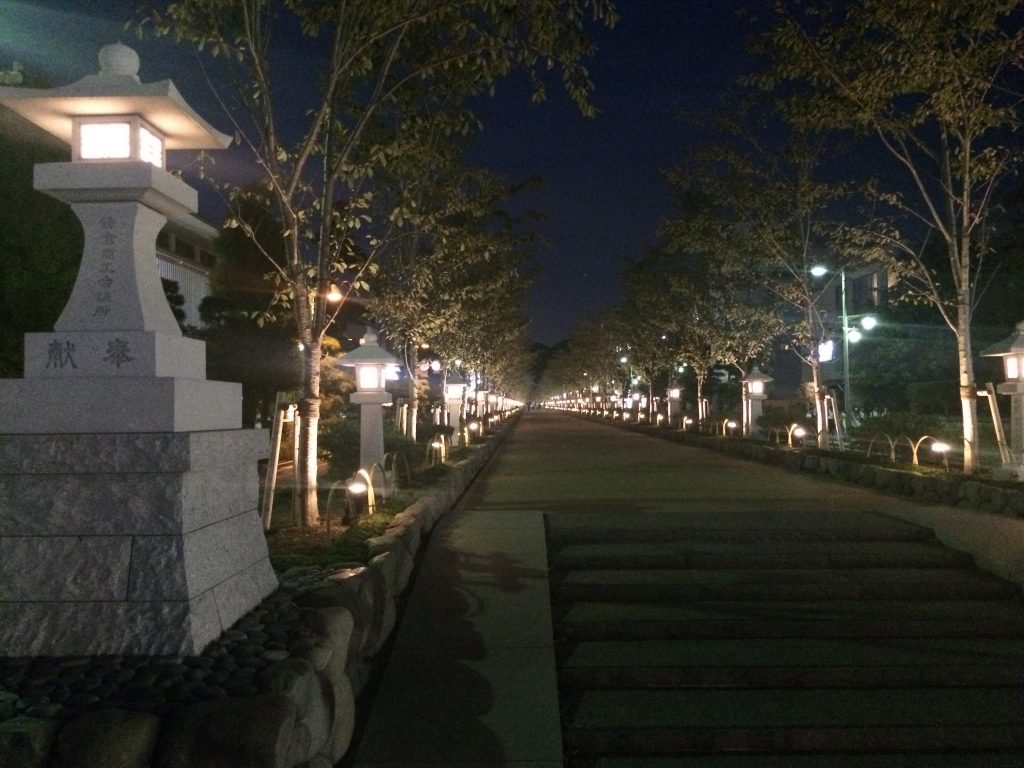 Entrance to the Tsurugaoka Hachimangu is free, and it’s well lit at night. The shrine has an overlook down the main street of Kamakura, which makes for a really nice approach. 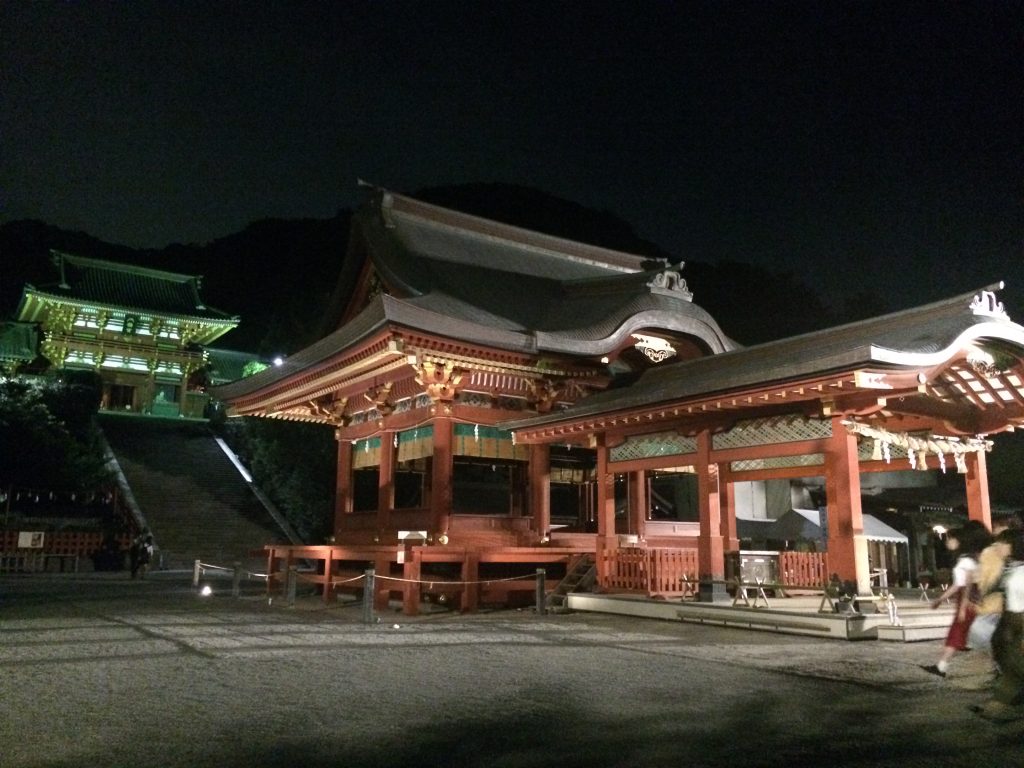 Once we got to the mainland area near Enoshima, it was already dark, so the plan was to just get to bed and explore around the next day.

We spent the next several hours driving around and trying to figure out where we were going to spend the night.

The parking situation in Japan is…. dumb. Outside of the main cities, we expected there to be street parking – but in reality, this concept seems to be almost unheard of in Japan!

Along the Katase Nishihama beaches (the mainland just west of Enoshima island), there were several large car parks for public parking directly opposite the beach but they were chained off as they seem to close overnight. 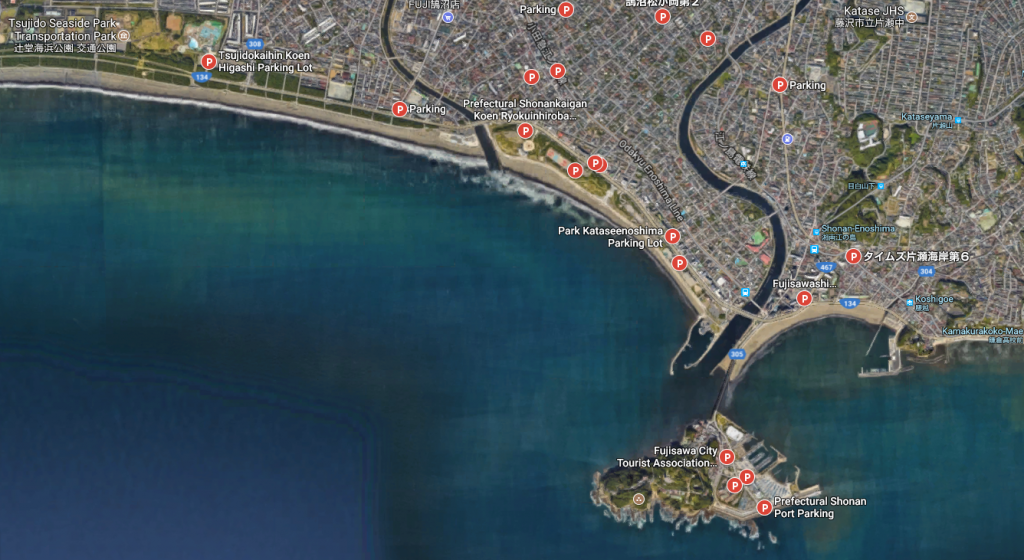 We didn’t know it at the time, but this whole area is the Shonan Nagisa Park, and there are paid parking lots all the way along. In this area there are the famous Shonan surfing beaches, tennis court, skate park and

For some reason, it also looks like you can have a 5 minute trial of a Segway for free in this area if you park in the Western Parking lot (check this link for more details. Japanese only but google translate works well enough). 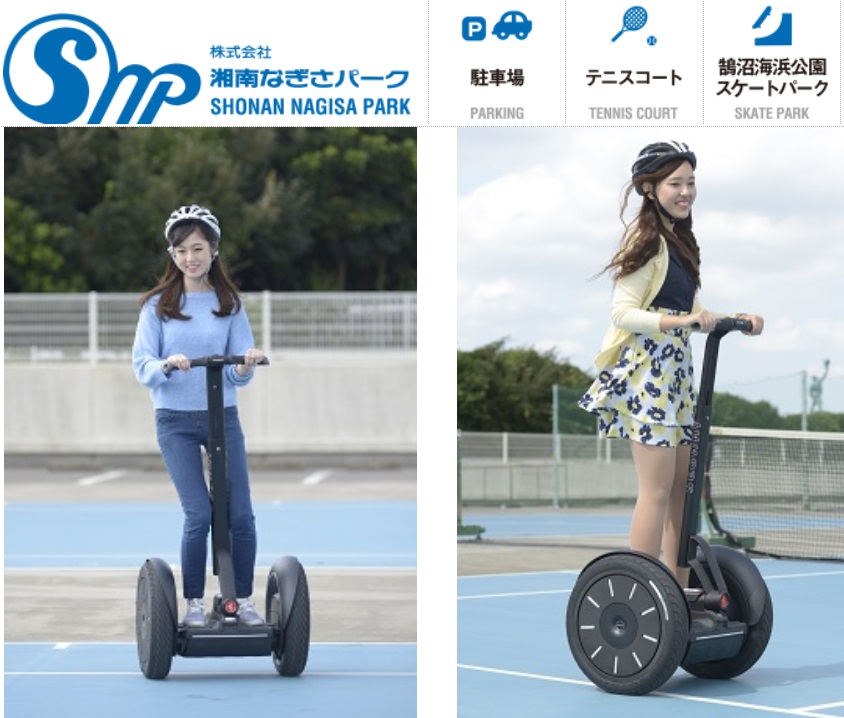 After driving around for several hours looking for a suitable overnight parking spot, we ended up parking at a 7/11 for the night in a quieter area in Katase city where there seemed to be a decent amount of free parking spots.

We bought dinner from the 7/11; a curry for 580 yen and some Inari for 200 yen. It made us feel a little less scummy about using their carpark for the night.

After eating in the car, we settled in to spend the night in our car park as discreetly as possible (despite being directly underneath a security camera). Luckily our campervan had window blinds and shades so that no one could see into the car.

The next morning, we woke at around 6.30 AM and bailed as quickly and discreetly as possible, with all the shame that comes with being a cheapskate and spending the night in a convenience store’s carpark to avoid parking charges brings.