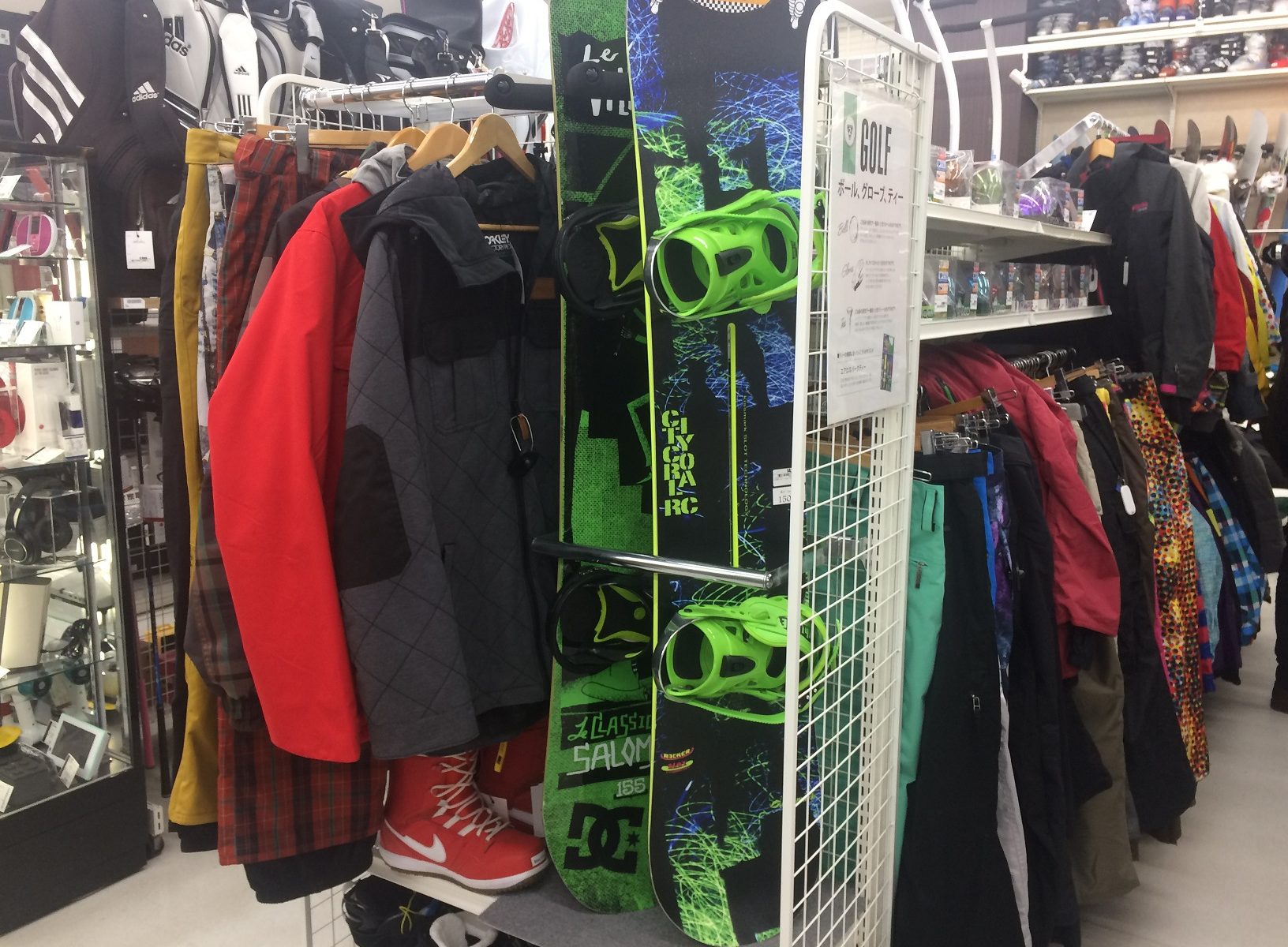 Since we’re living in Sapporo for a month, we wanted to hit up the ski slopes a few times during our stay. In the quest for the cheapest way to do that, we decided to buy our own snowsports gear rather than hire it.

This post will talk about which shops we went to in Sapporo, how much things cost and what was available, and what you can expect when you try to sell items back.

‘2nd Street’ is a reuse store or op shop/thrift store selling second hand goods. There are so many of these in Sapporo, seriously! 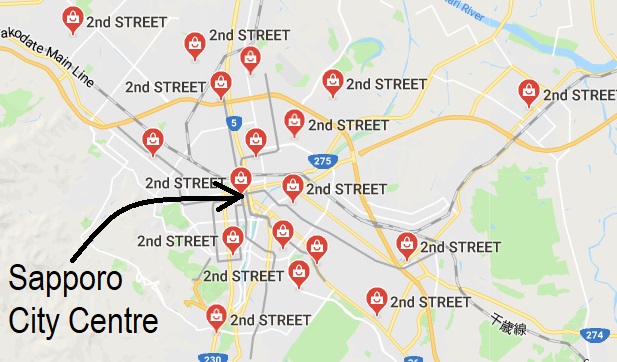 We went to the ‘Hikari Star Hotel’ branch of 2nd Street in Higashi-ku which had plenty of snow sports equipment on offer in early December. This is the beginning of the snow slopes season, so I am not sure if the amount of equipment available would be less at a later time.

If you are planning on shopping for used snow sports equipment and clothing, then plan the shops you are going to visit in advance, as not all sell snowsports gear/wear.

We also visited 3 other 2nd Street stores looking for snowsports gear (the Tanukichiro 3-chome branch and the Tanukichoji 4 chome branch in Sapporo city, and the Fushigo store in Higashi-Ku) and none of them sold sports equipment or wear (snow jackets and snow pants etc.).

2nd Street Outdoor appears to be a type of 2nd Street store that carries goods like camping, hiking, fishing, sports etc gear. It looks like there are multiple branches, but we didn’t go to any of these to be able to verify, so do your own research.

Unfortunately, we didn’t get a chance to check out the Kitano branch that was recommended to us, as it was somewhat far from our place. We worked out that our public transport costs would be around 1,000 Yen each and 2 hours return trip time just to get to that branch, so we gave it a miss.

There weren’t any affordable large size (31-32) snowboard boots available at the second hand store, so one of us had to rent boots anyway – we decided to make it a boots + board rental since it works out only a little more as a package, and then we wouldn’t have to worry about boots and board compatibility issues (if such a thing exists??).

They had nearly everything we needed at the Hikari Branch 2nd Street we went to. Following are some of the price ranges we saw:

There were plenty of jackets to choose from, in all sizes from childrens right up to westerner XL, and no-name brands to things like Billabong, Oakley, Burton  etc. 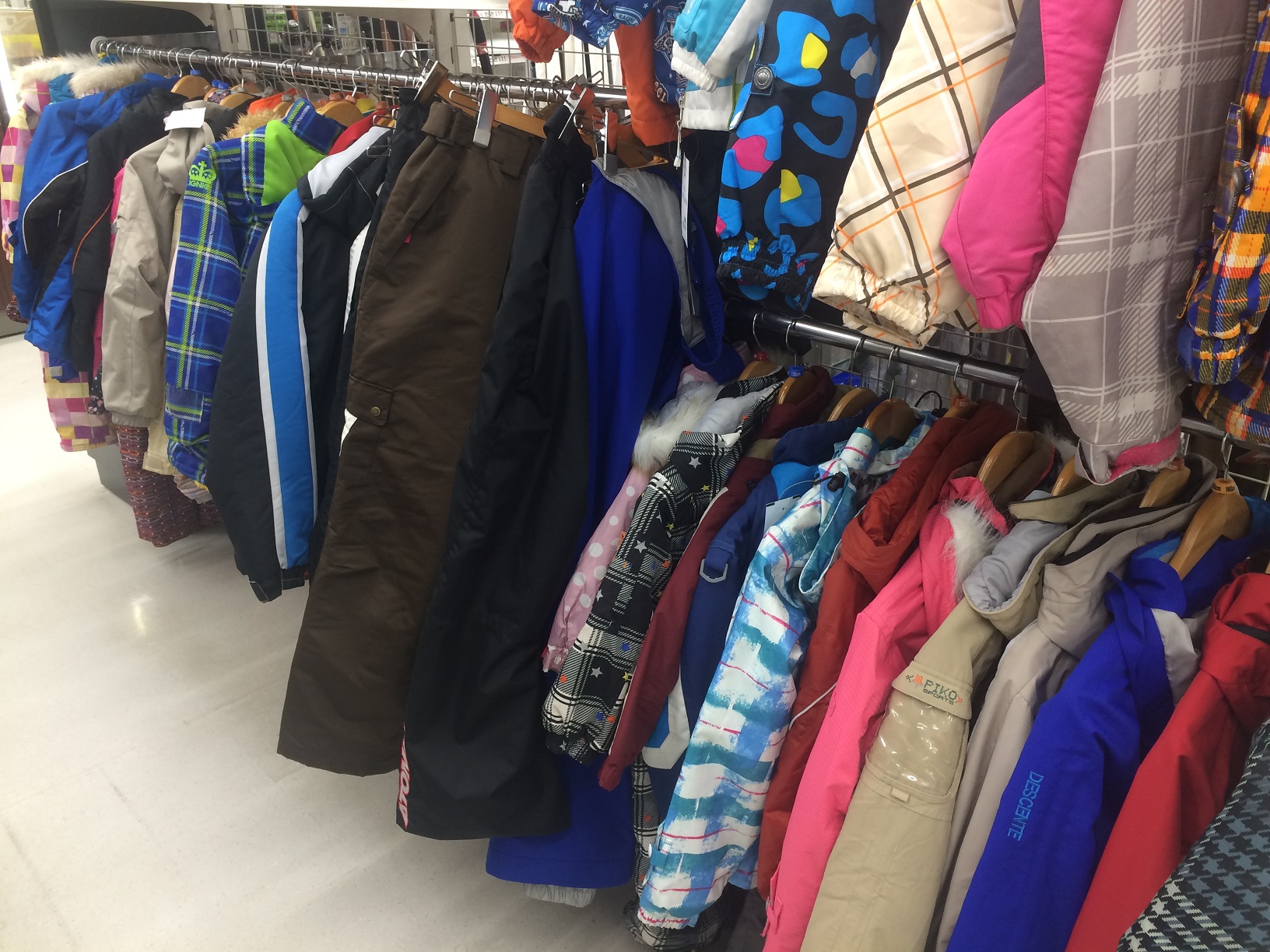 There were heaps of snow pants to choose from, and even a separate section for kid’s sizes.  The employees were even bringing out more shelves of pants while we were there, but I am not sure how well stocked it might be later in the snow season. 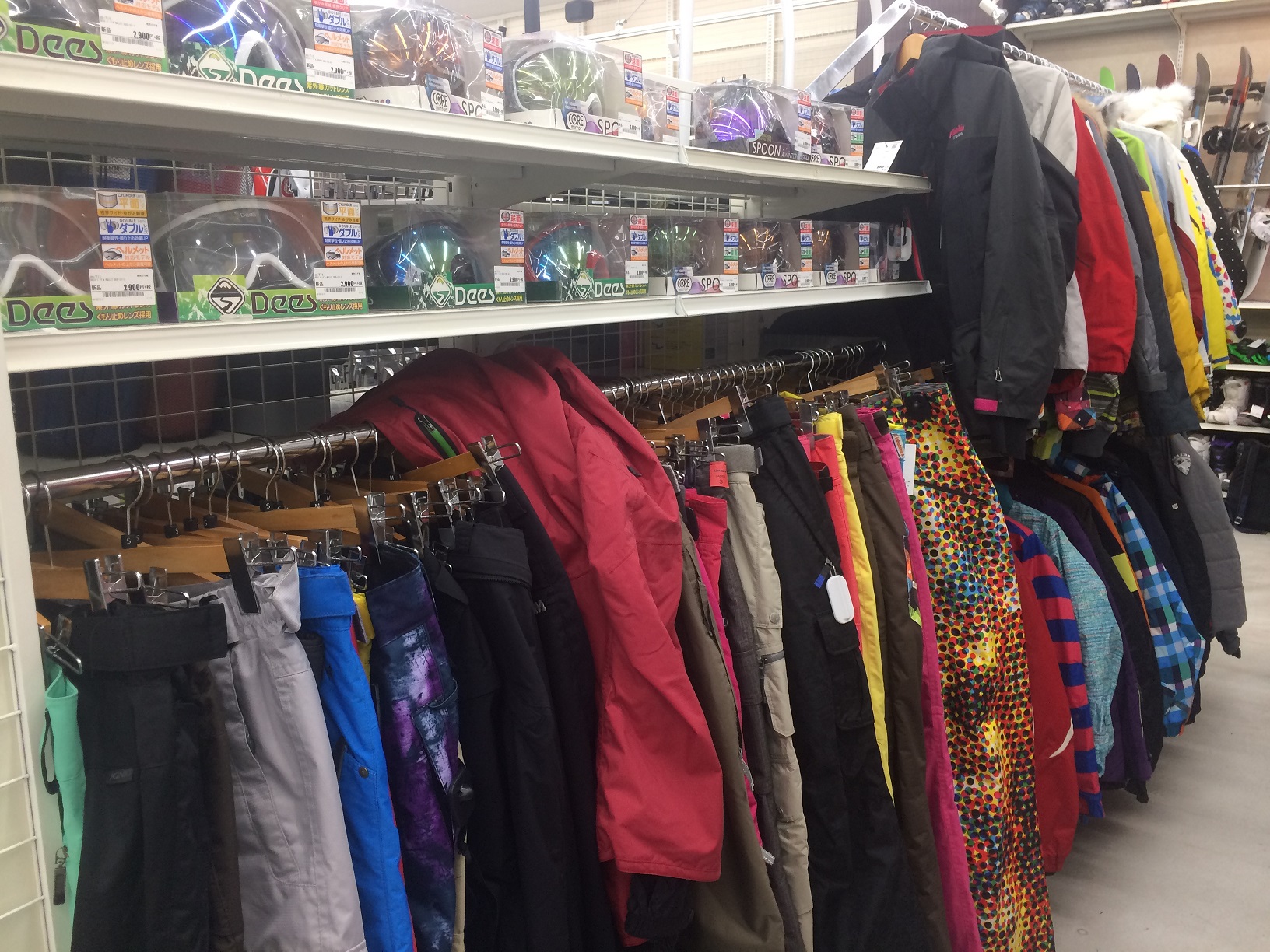 Not  being skiiers, we didn’t really check out the ski equipment too much, but there was a lot on offer.

They had a bunch of snowboards already set up with bindings on the shelf. They also had some boards only, and bindings only.

The bindings by themselves seemed to be all around the 5,000 Yen or more mark, so we opted for a budget already set-up board. 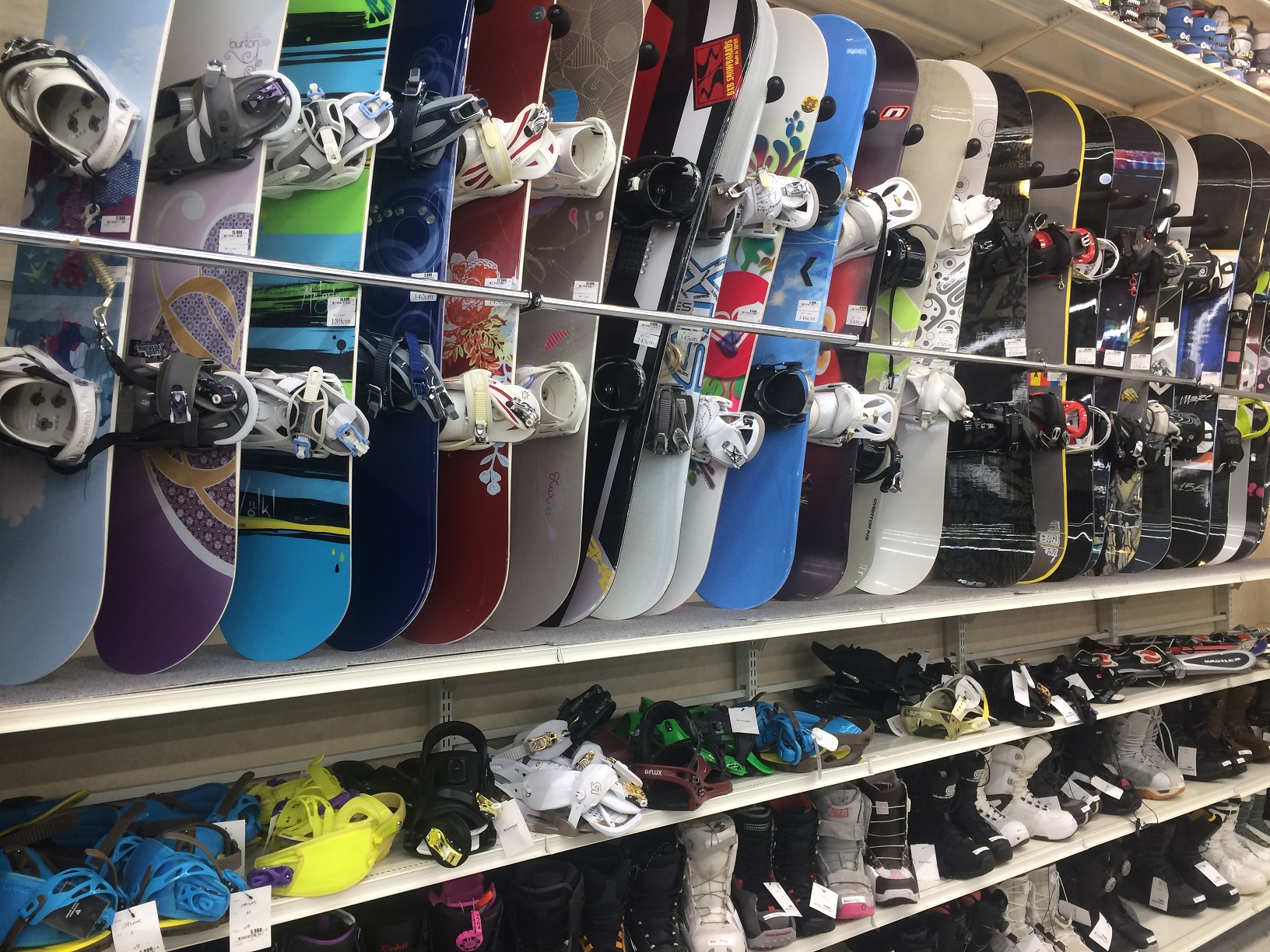 There were lots of boots for sale for both snowboarders and skiiers (although I didn’t get many photos of any ski boots!). There would have had to be at least 50 pairs or more so plenty to choose from.

Unfortunately they didn’t have many larger sizes (Size 31+), only one pair that were 15,000 Yen, so that was off the cards as it was too expensive.

Pricewise they seemed to range from about 2,000 Yen and up, so if you budgeted between 2,000 – 3,900 Yen you should be able to find a pair within that price range (assuming you don’t have an irregular foot size!).

They didn’t have many gloves available.  I guess most people don’t sell their gloves second-hand.  We did get lucky though as it looked like there was a bunch of women’s gloves (new) that were maybe reject stock from a shop. Apart from these though, there weren’t any other gloves.

Like the gloves, there were a few loop neckwarmers available but they looked like they might have been excess stock from a store, because they were still in the original packaging. Not bad for 300 – 500 Yen though, so we picked up one each in case it was cold on the slopes.

We already had our own beanies, but there were heaps available ranging from 300 Yen upwards. 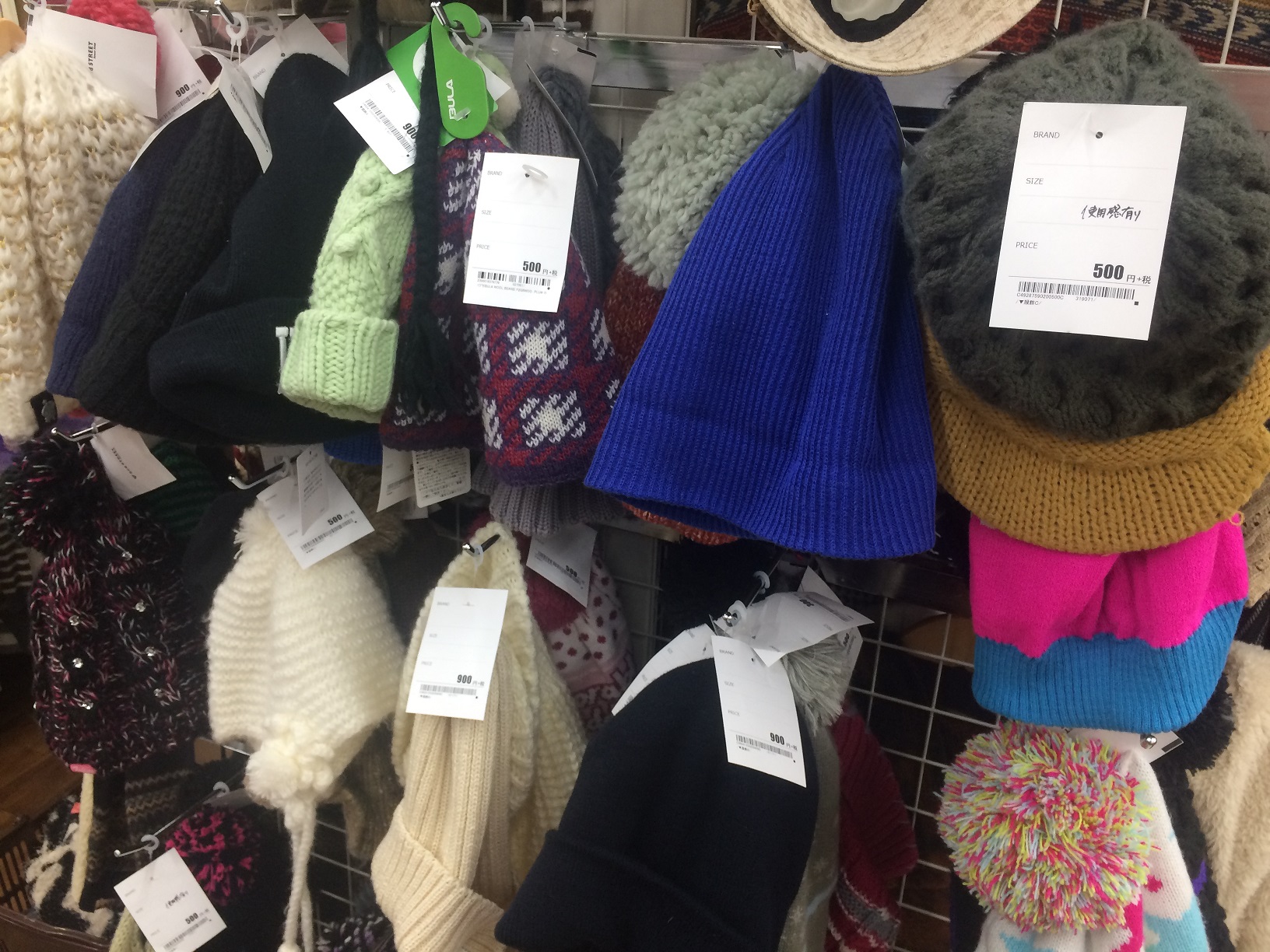 Selling Back Once You’re Done With The Gear

We got some advice from a friendly local that the buy back prices from 2nd Street is around 1/3 of the cost that you paid for them.

We’ll see how this actually goes when we sell back our items in a few weeks. Not sure if it will be a time-consuming or painful experience – we’ll see.

Another thing to be aware of when buying second hand gear for snow sports is that you don’t really have anyone helping you understand what you’re buying.

For example, we are complete beginners to snow sports, and we tried to do a little bit of research into snowboards before buying. There are all kinds of considerations that you might want to take into account, like board width, shape, length etc.  Also make sure that the bindings on the board can work with your boots, etc.

We did the basic checks and haven’t had any issues so far, except the soles did start to fall off my Burton snowboarding boots after a couple of days. (To be fair, it was probably a listed defect on the label of the item, but I just couldn’t read it as it was all in Japanese! No wonder they were so cheap.).

Of course, if you hire your gear, the shop will make sure that it’s all set up correctly and that your stuff is comfortable – and if you get the wrong size, you can usually just swap it out mid-hire.

Things To Be Aware Of

If you do plan on buying your own gear instead of hiring, just be aware that it can take a little more time and it’s certainly not as convenient as hiring.

It took us a couple of hours at the shop to pick out our gear, and I’m guessing it’s going to take a while to sell it back too.

Then there’s also the hassle of carrying your gear with you to the snow field on public transport each time you want to go.

For me though, I’m happy with the savings that buying over hiring will give.

I’ll give a breakdown of how much we would have spent if we hired each time at the end of our snow season.

Here’s the haul that we ended up with: 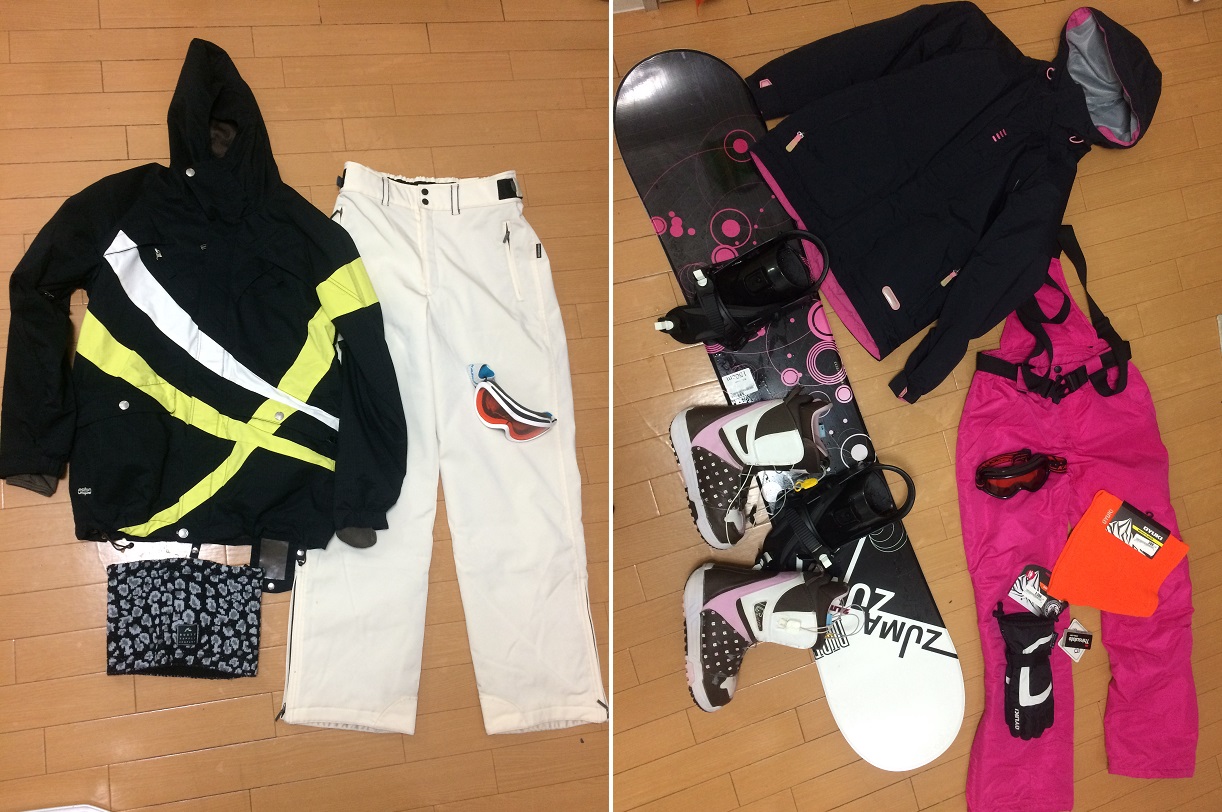